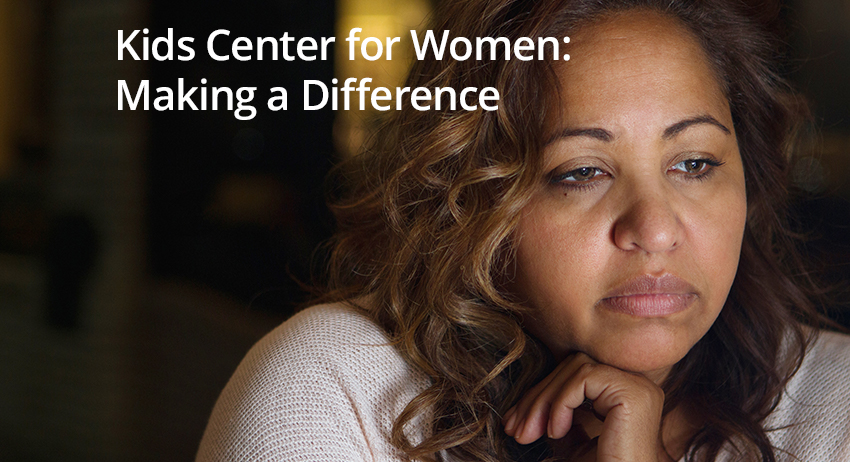 The Kids First Program for Women, a six-hour class designed for women who have left relationships where intimate partner violence is present, has been part of the Kids First Center curriculum for over 25 years. I have been involved as a facilitator of this program since its inception and was one of the authors of the program booklet that women receive when they attend. Of all the work I have done and programs I have facilitated over the years at Kids First, I am the most passionate about this program and it’s continued relevance.

I began my involvement with Kids First by facilitating their signature co-parenting education program, The First Step, 25 years ago.

Many of the women in that program would approach me at the break or at the end of the program and ask, "How can I co-parent with an abuser, I have a Protection from Abuse Order? This doesn't feel safe, what you are asking me to do!" and other comments.

I started to think about their concerns and approached Kids First about the need for a program that addressed the complex issues that women in abusive relationships were confronted with every day. Hence, after many meetings and thoughtful discussions, the Kids First Program for Women was born. The booklet was written by Kids First in collaboration with many domestic abuse agencies in Maine at the time.

After all these years, I am saddened to say that domestic abuse is still rampart in Maine and across the globe. According to the Maine Coalition to End Domestic Violence (MECEDV), 1 in 4 women have experienced contact sexual violence, physical violence or stalking by an intimate partner during their lifetime.

Although there have been some changes and there are now more programs available to help women who experience domestic abuse in Maine, it is not enough because society’s views around abuse still have not changed in any significant way.

The Kids First Program for Women addresses issues of domestic abuse and intimate partner violence in very specific ways. We spend time discussing the effects of domestic abuse on children. The women who attend this program are always very concerned about the safety of their children and having them spend time with the parent who has abused them. We also talk about the difficulties of trying to safely co-parent with an abuser, as the courts so often determine they are legally required to do. There are so many dynamics involved with intimate partner violence that make it impossible to co-parent successfully that some alternatives must be considered. We often talk about parallel parenting, where parents only communicate with one another when absolutely necessary in order to minimize opportunities for abuse and intimidation.

We discuss the National Domestic Violence Hotline’s Power and Control Wheel in detail. Abusers exert power and control over their victims and engage in lots of "crazy making" tactics to keep women isolated. Many women who have attended the program report feeling like they were "crazy" because of all the things their abuser has said and done to them.

What is common among all abusers is that they "minimize, deny, and blame." They minimize and say that it wasn't as bad as the woman reports, or they deny that it even occurred, and they blame the woman for what happened. This leads many women to doubt themselves and even question their own sanity.

The real answer is “men abuse because they can!" Society does not hold them accountable, and they get away with it over and over again, from generation to generation. Unfortunately, this happens everywhere in society! We do not do nearly enough to protect women and their children and to believe women.

If you were to attend Kids First Program for Women and listen to all the women's horrific stories of being strangled, raped, demoralized, screamed at, stalked in person or on social media, having trackers put on their cars, having other people follow them, and the list goes on, you too would be forever changed. I know I was and continue to be! That is why I am so passionate about this program and an advocate for change!

Betsy Van Betuw, LCSW, has been facilitating programs at Kids First for over 25 years, including First Step, Next Step, Kids First Program for Women, and Divorce Support Groups for Children & Adolescents. She has also worked as an elementary school social worker for over 30 years, and has owned a business call Maine Supervised Visitation Center for several years where she supervises visits between a parent their children when the parent is not able to see their child alone due to domestic abuse, substance abuse or mental illness.